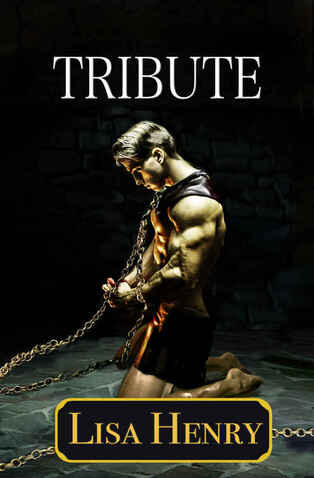 Cover art by JA Rock
​When the fearsome warlord Brasius chooses Kynon as his tribute, Kynon tells himself it’s the price of peace, and that he can endure anything. If his slavery will save his father’s kingdom, then he will be a slave and submit to every indignity the warlord and the senate of Segasa require of him. He can live with the shame; it’s the mind-blowing pleasure that frightens him.

But the warlord wants more than a tribute who will respond eagerly to whips and bondage. The warlord might just want the man underneath: the prince, the soldier and the tribute, if Kynon can figure out who that is.

On an enforced journey of self-discovery, Kynon learns that being the warlord’s tribute isn’t just about submission. And, to be the tribute that Brasius wants him to be, Kynon will have to defy all the traditions of Segasa and risk the wrath of the senate that really holds his chains.
Harsh, porn-packed pain and humiliation and master/slave dynamics is what you get

An excerpt from Tribute:

“There is no price too high to safeguard the crown.”

The philosopher Reiner used to proclaim it vigorously, each word punctuated with the stinging rap of a cane over Kynon’s knuckles.

“Pay attention, boy! You’ll need to know this one day if, gods forbid, you’re ever king!”

Kynon, having a decent grasp on arithmetic and two older brothers who were the pictures of health, had always rolled his eyes at that.

“Well, you’ll need to know it anyway,” Reiner would say, flicking him on the ear.

No price too high. Kynon had held on to those words for days now and tried desperately to believe them. “There is no price too high to safeguard the crown.”

For the last two days Kynon had been confined to the tower with his surviving family. There, in the darkness, he had felt as if he could hardly remember the times of peace and prosperity. The war had lasted for three years, but the shadow of it had been with him for longer. The warlord Brasius was unstoppable. Kingdoms fell before him. In a little over two decades he had conquered half the world for the senate of Segasa. He had the blood of hundreds of thousands on his hands. Caralis was just his latest prize—a small and formerly prosperous kingdom that could not withstand the warlord’s armies. Three years ago Brasius had crossed the border. Two nights ago he had taken the capital.

A strange silence had fallen on the castle in the two days since. The servants, if any of them remained, were either forbidden to enter the tower, or too afraid. Kynon had expected to hear the sounds of Brasius’s men celebrating and sacking the town, but there had been nothing.

There were almost twenty of them locked in the tower room: Kynon, his brothers, Nemic and Tolan, their mother, two aunts, some cousins, and members of the king’s council. There were other rooms in the tower, and Kynon suspected they were all filled with the king’s loyal friends and retainers. The queen, Kynon’s mother, had wept every night. For the king, Kynon supposed. They hadn’t seen the king since the warlord’s soldiers had taken the castle. They didn’t know if he was even still alive.

And Kynon was afraid. Sitting in the darkness, he wished that he was still young enough to put his head in his mother’s lap while she stroked his hair, like a frightened child. He wanted to cling to her and listen to her tell him that it would be all right. Nineteen years old, a prince and a soldier, and he felt like he had when he was five and scared of thunderstorms.

Kynon held his mother’s hand at night when she cried, and closed his eyes and tried to recall the words of the lullabies she had once sung to send him safely to sleep.

On the morning of the third day, having spent another uncomfortable and hungry night, Kynon was torn from sleep by the stamping of boots in the passageway outside the tower room and the sound of someone screaming.

“It’s my daughter!” Chancellor Varne gasped. “It’s Alysia!” He was on his feet instantly. “Alysia!”

Alysia! Kynon thought, jolting upright. He had not seen her since before the final battle. He had not thought of her for longer. She belonged to memory, as if he were an old man instead of a youth of nineteen. She belonged before the war, when she was pretty and sweet and had once refused to kiss him when Conal had dared him to ask.

“I’m going to fight the warlord,” he had told her. “Just one kiss!”

Blushing, she had fled.

Kynon had seen her once or twice since then, when the warlord’s armies had made their winter quarters within the borders of Caralis and the king’s army had been given some respite from the war, but those homecomings had been short and Kynon had changed since the coming of the warlord. He had been consumed with strategies then, with seeking out desperate alliances with neighboring kingdoms and countries, with keeping the wolf at bay. Dalliances and love affairs had had no place in his thoughts.

He regretted it now that he was going to die.

“Get back from the door!” someone outside shouted.

Chancellor Varne was not a young or heavy man, but Tolan struggled to pull him back and hold him there as the door swung open and soldiers entered the room.

Light burned Kynon’s eyes, and he raised his hand to shield his face.

Over the past few days, they had received several visitations from the warlord’s representatives. Priests, Kynon had guessed, both male and female. They wore royal blue robes with an insignia on them that Kynon did not recognize. They had walked among the prisoners slowly, holding their lanterns aloft, looking at faces, asking names, and making notes.

“What do you want?” Tolan had snapped when they asked his name for the third time in a day. “What are you doing?”

The robed man had not answered. He had only made some notation on the paper he carried.

And Kynon had realized in that moment that the robed priests and priestesses were compiling a list of those who would die. The warlord had to first make a show of strength by executing a prescribed number of prisoners, of course, so that later he might look merciful by sparing a few. The thought chilled him, but the next time one of the priestesses pushed her lantern toward his face, Kynon had looked back at her to show her he wasn’t afraid.

And when he heard Alysia scream, he knew the appointed hour had come.

This time when the door swung open, it was soldiers only.

“Get back! All of you, down on the floor!” their captain shouted. “Settle down!”

Outside, Alysia’s screams turned to sobs, and Kynon’s stomach twisted.

The captain consulted a list. “Kynon, son of Jaran, make yourself known.”

“No,” his mother whispered fiercely. “No!”

Kynon felt Nemic’s hand on his sleeve. He shook it off and stood slowly. “I am Kynon, son of Jaran.”

“Come with us,” the captain said.

Kynon heard a buzzing in his ears. He reached back down to his mother and gripped her hand briefly. “Good-bye.”
​
He heard her sharp intake of breath as the soldiers led him from the room.