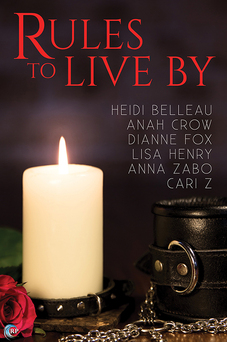 A list of rules to live by.
In Cari Z’s House Rules, jealousy leads Jonathan to break the rules his lover has established. He can’t decide which he enjoys more: his punishment, or the reward afterward. Good thing he gets both.

A lesson in humility.
In The Harder They Fall by Heidi Belleau and Lisa Henry, spoiled college boy Tad hires a prostitute, but “Daddy” couldn’t care less about what Tad wants. Instead, he’s going to give his spoiled little boy exactly what he deserves.

A cage that means freedom.
In Master Key by Anah Crow and Dianne Fox, Marquis offers Navin the key to the most intimate of locks, hoping it will help them to prioritize their relationship. And it does—until work and insecurities threaten to drive them apart again.

A spool of rope and a desire to be bound.
In CTRL Me by Anna Zabo, a night out between friends turns hot and tempting when Gabe deliberately pushes Tom’s submissive buttons. Then Tom discovers rope in Gabe’s glove-box—and not the type for securing luggage. 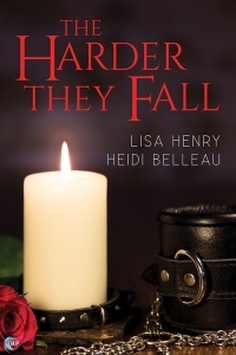 You can also purchase The Harder They Fall individually, from Riptide.

A lesson in humility.

In The Harder They Fall by Heidi Belleau and Lisa Henry, spoiled college boy Tad hires a prostitute, but “Daddy” couldn’t care less about what Tad wants. Instead, he’s going to give his spoiled little boy exactly what he deserves.
Reviews of The Harder They Fall, part of The Rules To Live By anthology:

Buy Rules to Live By here:


It was one of those days when Tad wanted to go home and kick the cat. Except he lived on campus, and he didn’t have a cat. What he had was nine hundred dollars in his pocket, and a well-thumbed business card. Nothing more than an address and a telephone number in shiny black print on a matte black background—writing that only appeared when you tilted the card in the light just so—but that was all Tad needed. He hadn’t been to the place in a week, but the urge to walk inside, take a breath, and feel like the master of everything he surveyed had been gnawing at him for days. And if the visit went like last time, even better. He hadn’t known he was the sort of guy who came hardest when he’d made his partner cry, but fuck it. Bitch needed to develop a thicker skin.

Last week, he’d swaggered into the place, laid out his cash, and demanded “the greenest bitch here.” Which totally went against the brothel’s “socialize and hook up” way of doing things, but Tad had no interest in wasting time schmoozing with a bunch of used-up whores.

Now that Tad had gotten a taste of teaching this place’s newbie what he could expect out of his worthless life, maybe it was time to sample the other extreme. Some whore way past their expiration date, probably desperate for money and clients in a room full of younger, fresher wares. Willing to do pretty much anything.

It would be a hell of a buzz to crush a guy like that. Someone who’d been in the game awhile. Someone who thought they were tougher than they were.

Tad imagined sitting on the bed flicking dollar bills in the guy’s face as he sucked his cock. Old, dirty, used-up whore. He got hard just thinking about it.

It was still early when Tad arrived at The Address. He’d gone straight from school to the bank to get his weekly allowance cashed out—all in small bills because he liked the feel of a thick wad in his pocket—and then it was straight to the whorehouse for his evening’s entertainment.

He’d failed an exam today. Not his first F, not his last.

Not that it mattered. He was a Jameson, after all. It would take a lot more than a few flunked college courses to dull the sheen of his bright future. Even so, his parents would still dutifully threaten to cut him off—maybe even go so far as to withhold money for a week or so—if for no other reason than to keep up the pretense that they weren’t completely fucking worthless pushovers as parents.

What better “screw you” to their little act than to make a lump sum withdrawal and spend it all on sex before they had a chance to cockblock him?

Oh, sure, they’d bug him to hell and back about where the money had gone, maybe even hire a private investigator again to tail him and make sure he wasn’t doing drugs—shit no, there were way better highs to waste his money on—but ultimately they’d relent. They always did; there was no mess he could make that their name and bank account couldn’t clean up. Even if he did somehow manage to cross that line, his parents had more important stuff going on than him. Lather, rinse, repeat.

He parked his car in the tow-away area directly outside the old brownstone. Fuck the parking inspectors, too. He’d had his car towed twice in the past year, which was a pain in the ass, but his dad had paid the impoundment fees without grizzling about it too much. What the hell was the point of driving a flashy car if you couldn’t park it wherever you wanted? At least he and his father agreed on that much.

Whistling, Tad locked the car and bounded up the steps to the brothel. He pressed the buzzer, and the door opened with a snick.

“Good evening, Mr. Smith,” the receptionist said. She was a middle-aged woman, always impeccably presented in tailored business suits. She gave the impression of being totally unshockable. If she disapproved of him after his last visit, she was too smart to let it show. Tad also had always admired the way she said his Incredibly Obvious Alias without laughing. He bet three-quarters of the clients in the place were called Smith. “How can we help you tonight?”

Tad grinned at her and pulled his cash out of his pocket. She didn’t even blink at how big his wad was, which was to be expected in a high-end, “cash only” place like this, but it annoyed him all the same. “I want the oldest bitch here,” he snapped at her.

“I’ll take this one,” a low, gravelly voice announced from behind him.