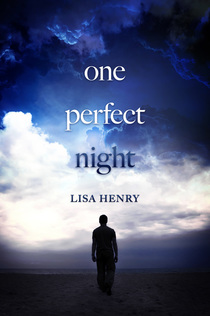 Tanner is a captain in the US Army, stationed at a radio post on an island in the middle of nowhere.

Nick is a coastwatcher, a man whose voice Tanner has only heard before over the radio waves.

They meet in the middle of war, when nothing is certain but this: Tanner and Nick are owed one perfect night.


This quiet and gorgeous story culminated in some of the most perfect minutes I’ve ever spent reading.
-The Novel Approach
Buy One Perfect Night here:

books2read.com/perfect
Reviews of One Perfect Night:

Was it possible it was worse here than on the island? Maybe. More likely it was a couple of degrees cooler here, except some idiot had built the place with closed-in buildings that were like furnaces during the day.

Sweat slid down Tanner’s back, plastering his shirt to his skin. He itched. Overhead, a ceiling fan slowly shifted the pockets of heat around.

Ahead of him in the line, a man droned on and on, and the woman seated at the desk ran a finger around the collar of her khaki uniform shirt. A paper fan lay open on her desk, the sort that you could pick up cheaply at any Chinese market. Tanner felt an unaccountable urge to dart forward and steal it. It would be worth it, for a breath of cooler air.

He transferred the envelope from his left hand to his right, leaving damp fingerprints.

Tanner looked up as a door in the lobby squealed open, and a pair of men stepped out. The tail end of their conversation followed them through the door.

“—after what happened at Namatanai.”

It brought Tanner out in a sudden chill despite the heat.

Tanner was used to hearing it when he was hunkered over in a canvas tent on a tiny speck of green in the vast blue ocean. The radio usually squawked right on dusk, and Tanner always leaned closer to make sure he didn’t miss a single word.

He hadn’t thought to hear it here in an office building in Townsville, not even at Area Combined Headquarters. Strange to think that all of the business of the war that was conducted here around maps and files and reports had any relation at all to the mud and the heat and the chaos of the Pacific islands.

Tanner stared at the men. One was small and rotund with a bristling moustache and a bald head. The other was lean and lanky and tanned by the sun. He was still talking when Tanner turned around, his voice lower now, calm, but still fucking unmistakable.

Tanner had listened to his voice for weeks, waited for it every day while he watched the shadows from the palm trees stretch out along the beach. He liked the guy’s voice. It was different from the others. Less clipped. Younger. The accent was mostly Australian, but sometimes it slipped. Ayet, instead of eight. Ailan, instead of island. He had the Pacific in his veins. He was a voice, just a disembodied voice that floated across the ocean on the night air, and Tanner had always listened, the knot in his gut loosening whenever he heard him.

Whenever he knew he was okay.

He missed that voice when he didn’t hear it for a while. Tossed and turned each night thinking about it. In the day he’d turned his gaze north, fixing it on the hazy ocean horizon. Willing the guy to be okay. The guy. Blue Sky Guy.

At last the man in front of Tanner was finished. Tanner took his place and slid the envelope he’d carried from the airfield across the surface of the desk. He signed the receipt the woman gave him, and wished her a good afternoon. He had no idea what was in the envelope, none at all. But that was the nature of the military.

“When you get to Townsville, take these to Area Combined Headquarters,” the major had told him, and Tanner had saluted.

He didn’t hear the woman’s reply. Too busy keeping an eye on Blue Sky Guy. Making sure he didn’t vanish.

Maybe it was fate. Tanner had begun to believe in fate a little, or at least not to disbelieve in it. You met a man who knew someone from home, and it was fate that you shared a drink. That guy who had gone to college with your cousin? That guy whose family had gone to Rehoboth Beach for summer vacations just like yours had? Who remembered the taste of the ice cream on the pier? You made him your brother, even if it was just for a few hours. You did these things because you might not get another chance.

You did them because you grasped for any connection to home.

Maybe even more profound, because hadn’t Tanner imagined this moment? Hadn’t they all.

“If I ever meet those guys,” Caruso had said a hundred times, “I’d like to shake their hands”

But it was Blue Sky Guy that Tanner had thought of the most. That slipping accent. That voice that sounded younger than the rest. The sense of humor that even a clipped radio transmission couldn’t entirely hide.

The guy had noticed him staring, and closed his mouth. He watched warily as Tanner approached.

He was as young as Tanner had thought. Only in his mid-twenties at the most. He was good looking--about five foot eight, with a pleasant face, and light brown sun-bleached hair. He had a short back and sides, and wore his hair longer on top: a civilian haircut instead of a military one. His eyes were the color of the Pacific at dawn.

The guy hesitated before shaking his hand.

“I need to buy you a beer,” Tanner said.

The guy smiled. “Yeah, that would be good.”