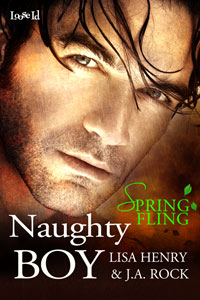 Cover art by Fiona Jayde.
The Naughty Boy is a short story featuring Brin, Ferg and Lane from The Good Boy.
(The Good Boy #1.5)

Brin and his Dom, Ferg, have enjoyed a fun, sexy domestic discipline relationship for years. Brin knows his role--flamboyant, fabulous brat--and Ferg knows it's his job to play the big bad Dom, giving Brin the punishment he desperately craves. When Brin is tasked with dressing his new friend Lane Moredock for a date with Brin's ex, Derek, he's excited--fashion is what he knows best, and Lane is going to look stunning. But what should be a fun afternoon takes a serious turn when Brin sees that Lane has been injured, and Lane's reluctance to tell Brin the truth about it makes Brin start to question who he is, why things didn't work with Derek, and what people really think of him. Is he just a flittery, glittery fashion fairy? Or does he mean something more to the people he loves? And can he find a way to bring these doubts up with Ferg--or is Ferg going to have to Top his way to the bottom of this?
Buy The Naughty Boy here:

Loose Id
Amazon -- in paperback form with The Boy Who Belonged
Reviews of The Naughty Boy:

“It’s not every day you get to dress a hot piece of ass up for a first date with your ex-boyfriend,” Brin announced as he dragged Lane into his bedroom. “You’re lucky I’m a nice person, or I’d convince you to wear plaid.”

Lane looked worried, but that was nothing new. Brin figured he was worried about being here, about his date with Derek, and about this whole fashion makeover thing. Of course Lane probably worried about everything: the fiscal cliff, how gravity worked, and whether or not Lassie really would come home. Not to mention that whole SEC investigation, which, to be fair, Brin supposed was actually worth worrying about.

“Is that…um, is that a problem?” Lane asked, warily casting his eye around the room.

Ferg had done what he could to keep the bedroom neutral, but Brin had made his mark. The bedazzled comforter, the growing collection of glass angel figurines that were ironic, and the lampshade with candy-pink beads hanging off it. Ferg had been so boring before Brin. Apart from the bottom drawer of the dresser, of course. Brin had wanted to make a wall display of paddles and floggers, a kind of shrine to good old-fashioned ass-walloping BDSM, but Ferg had put his foot down. Mostly because his parents visited a lot. Mom and Dad McIntyre had already used up a lot of their open-mindedness since meeting Brin, and Ferg didn’t want to drain that well entirely dry.

“Plaid? It’s a huge problem, Laney.” He pushed Lane toward the bed. “Now take a seat here, and let me work some magic.”

“I meant…” Lane trailed off.

Brin knew exactly what Lane meant, and he’d brought it up in the first place because there was no point ignoring it. Derek was Brin’s ex, and now he was Lane’s…boyfriend? Close enough, even if Lane and Derek weren’t advertising it. So acknowledge it, joke about it, and get the hell over it. Brin would always love Derek as a friend, but they’d both moved on. Well, Brin had. And this afternoon—getting Lane dressed up for his big first date—was Brin’s way of making sure Derek moved on as well. Other than sticking a bow on Lane’s ass and tying a gift tag around his cock that saidBest wishes, love Brin, he wasn’t sure how much more supportive and encouraging he could be. Which wasn’t to say that Derek had been heartbroken after Brin asked for time apart—they both knew that was the best decision—just that it had taken Derek a while to put himself out there again. He was busy with his work and his family and his comfortable rut. Well, not tonight. Tonight Lane was going to look hot as hell, and if Derek didn’t end up balls-deep in the kid by the end of the night, well, there was no helping him.

Brin flung open the closet doors. Ferg’s stuff was on one side. Boring, boring, boring. Brin’s stuff was on the other side and in the back, slowly encroaching on Ferg’s like an untamed jungle full of weird, exotic creepers. Or maybe that was just the one vivid purple floral unitard that was part of a Halloween costume and therefore above suspicion.