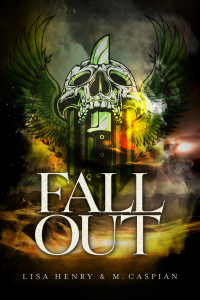 High-school boyfriends Jack Haldane and Bastian Wade thought everything would be perfect once they reunited at college, putting disapproving parents and small-town attitudes firmly in the past. Now Jack’s on track for a PhD scholarship and a career as a researcher, and Bastian . . . well, living inside a broken body and trailing along in Jack’s shadow didn’t feature in his lofty teenage ambitions.

A weekend camping trip back home offers a chance for them to reconnect, but an ugly confrontation with the local motorcycle gang is only the start of their problems. When disaster occurs and the world unravels, will Bastian and Jack manage to hold on to each other, or fall further apart as they try to survive?

For just a second Bastian was running, breathless with exhilaration, almost weightless, and then the car bounced over a rut, his head knocked against the window, and he jolted awake. Pain arced up his spine.

“’s’okay.” Bastian blinked out the window. It took a moment to shake the dream off, to anchor his wandering mind in the here and now. Here, on the road to the trail, in a car packed with camping gear they hadn’t used in forever. Now, with Jack. Now.

Safer to think of now than tomorrow, when the distance had been growing between them for months.

“I’m okay.” Bastian turned his head to look at him. He smiled slightly, hoping to blunt the sharper edges of Jack’s tone. “I fell asleep. Are we almost there?”

“You’re tired.” Jack gripped the steering wheel tightly, his gaze flicking from the road to Bastian, then back to the road. “You’re not eating.”

Sometimes a fight felt like an inevitability. Like a storm that built up throughout the day, they could both see it coming but neither of them could stop it. All they could do was duck for cover when it broke. They fought the tiniest things, but they were never tiny unless you were on the outside looking in. This morning at the diner Jack had said, “We’re not going until you eat at least half your pancakes.” And the waitress had smiled and cooed like it was the most precious thing ever, but Bastian wasn’t a child. Jack was supposed to be his boyfriend, not his minder.

Bastian didn’t answer. This was almost like a dreamscape too. Some place where things didn’t make sense, where themes and cues repeated over and over again, every time he spun around on an increasingly wobbly axis, making him nauseous. They’d been over this a hundred times. A thousand. Why were they here again?

He squeezed his eyes closed, shutting out the landscape flashing past. The trees. The dirt driveways appearing suddenly and then vanishing again. The weathered mailboxes on posts. The sides of the bitumen uneven and chewed, crumbing away into gravel.

If he could sleep again, just for a little while, then maybe he could run.

Jack glanced over. Bas was asleep again. Guilt bit at him for having woken him in the first place. He should have been driving more carefully. Bas was always tired. Lately Jack had lost count of the number of nights he’d woken to find the bed beside him empty, the weird bluish glow of the laptop spilling out from the living room. Sometimes it felt like Bas was fading away in front of him, becoming a thin, nocturnal creature, as insubstantial as a ghost. Even now, in the morning sunlight, the dark shadows under his eyes were as vivid as bruises against his pallid skin.

He was beautiful, though. Had been since the first day they’d met, although on the first day of fourth grade he’d had no way to articulate that. Jack had just noticed the new kid. He had shiny hair and a smile that was trying not to be nervous, and eyes that were the same shade of blue as the marble Jack had won off Zane Hallister back in third grade, and lost down a drain on Maple during the summer. Jack had figured it must be horrible to be the new kid, so he’d taken Stinky out of his pencil case and let the new kid hold her and stroke her cinnamon fur and feed her a yogurt raisin. After that, of course, they’d been best friends.

Jack glanced at Bas again, then fixed his gaze on the road. A long, straight stretch, but he wanted to avoid any more ruts or potholes.

Jesus. Everything was simple when you were ten. Sometimes he wished he could fix that pinched, anxious expression that haunted Bas these days just by giving him another rat. Except the tightness around his eyes wasn’t first-day nerves, but pain.

Jack shifted in his seat, and tightened his grip on the wheel. He glared at a stone chip on the windscreen, and hoped it wouldn’t get any worse. He didn’t have the money to get it fixed. Sunlight caught in the webbed edges of the chip, and it shone like ice, every tiny flaw, every fault line illuminated. One good jolt, he guessed, and the whole thing might shatter. Probably the only thing holding it together was habit.

Jack resisted the urge to reach out and touch Bas. To slide his fingers down his forearm, and watch the fine hairs stand up in their wake. He watched the road instead, waiting for the landscape to resolve itself into something familiar. The blue mailbox shaped like a barn. The blasted trunk of a beech at the bend just before the road began to rise. The cluster of flowering dogwood. The rusted-out truck. All the landmarks that had become signposts in his memory and announced they were getting closer.

It had been a while since they’d gone camping up the trail together. Jack had been back a few times on his own, his field notebooks and his laptop weighing down his pack, but he and Bas hadn’t been here together since high school. And they hadn’t been much interested in the salamanders then.

It felt a little like coming home. He couldn’t shake the feeling that it also felt a little like coming back to say goodbye. A last hurrah, or something. It was Bas who always said he liked his stories to end where they began. When he’d said he wanted to come camping again . . . well, what the hell was Jack supposed to think? He wanted to ask Bas. Wanted to sit him down and stare into those eyes of his, and twist strands of his golden hair into elflocks, and remind him they’d been best friends since they were ten and life was no more complicated than pet rats and marbles and LEGO and computer games.

But he didn’t. He hadn’t. Because of a part of him, the part of him that was buried even further down than the sick pit of guilt inside him, wanted Bas to leave him. Just so he didn’t have to look at him every day and remember. No more medical appointments and physio and meal plans and exercise regimes, and no more coming awake in the night when Bas’s breath hitched into a short, sharp sound as he tried to roll over. No more.

No more asking every few minutes if he was okay.

No more pretending he believed the lie when he said he was.

He wanted it over.

He also wanted Bas to never leave him.

It was fucked up, and Jack didn’t know what to do. Didn’t know how to make sense of both wanting him and resenting him and feeling this constant seeping guilt. Sometimes he wished he’d died in the accident, or that Bas had. One way or another, that would have been a clean break, and not this thing that lingered and lingered but never let go.

He was terrified that one day he’d wake up and realize he hated Bas.

What if that day had already come and he just couldn’t see it yet?

He tightened his grip on the wheel.