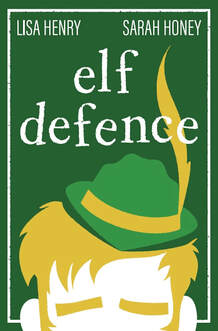 Cover art by Stephanie Westerik
​Royal envoys Calarian and Benji embark on a quest in the alpine duchy of Tournel. Things go rapidly downhill when the duke plummets to his death from the tower wall. Whoops—that's going to be hard to explain. And it’s not as though they can just grab the nearest human and make him the new duke.

Enter one Lars Melker, a slightly gullible cowherd built entirely of muscles and sunshine, who happily accepts their word when they tell him he’s the duke now.

Soon Calarian and Benji are knee deep in teaching Lars how to fake it until he makes it. They're also dealing with mountain trolls, a monster, a missing cow, and, most shocking of all, a growing realisation that their elves-with-benefits arrangement might be turning into something with feelings.

Add in their mutual attraction to Lars, and suddenly the hills are alive with the sound of emotionally compromised collectivist anarchist elves.

Also, what’s the deal with those leather shorts?
If you want to learn what melts hardened hearts, and to soothe your own pained soul, take a load off, put your feet up and take a bite out of Elf Defence. No calories, and all the sweetness you could want in this standalone.

An excerpt from Elf Defence:

“To be fair,” Benji said as Duke Klaus of Tournel plummeted down the side of the tower and hit the ground with a sickening splat, “that was mostly gravity's fault.”

Calarian leaned over the edge of the tower and inspected the impact zone far, far below. He wrinkled his nose in distaste. “This is a terrible beginning to this quest!”

Benji shrugged and inspected his fingernails, squinting in the sunlight.

Calarian sighed and pinched the bridge of his nose.

“Go to Tournel,” Quinn had said. “They’re the victim of mountain troll attacks, and the duke has asked for our assistance. Find out what’s happening, and report back to us.”

“Oh, and Calarian?” Loth had added in a tone far too casual to ring entirely true. “Why not take Benji with you?”

Calarian loved quests. He’d been playing Houses and Humans since he was a child, but the shine had somewhat worn off the game since he’d helped rescue Loth and Quinn from a dank cell and restored them to the throne of Aguillon after defeating Lord Doom. Well, he’d restored one of them, and the other one had just gone along for the ride. The point was, Calarian was much more interested in real quests these days, so an adventure with besieged dukes and rampaging mountain trolls? That had definitely piqued his interest even if, as Benji said, it made him a bootlicker and a class traitor for taking orders off parasitic human kings who only existed to prop up a corrupt feudalistic system that oppressed the working people and whose heads would be the first on pikes when the revolution came.

In retrospect, Calarian wasn’t at all surprised that Loth and Quinn had wanted him to take Benji with him. Especially since Benji kept loudly insisting that he didn’t even want to live at the palace and was only staying to ensure Loth and Quinn didn’t devolve into despotic warlords who had been corrupted by power, and it definitely wasn’t because the beds were soft and the food was good and Calarian was there, and anyone who said that was the real reason was a liar.

Everything had gone well, at first. They’d taken a week to get from Callier, the capital of Aguillon, to Tournel. Duke Klaus, a hearty old man with fluffy white hair and a welcoming smile, had been very happy to receive them. He’d filled them in on the strange mountain troll attacks, and personally escorted them up to the top of the tower, where he’d leaned out to show them exactly where the last mountain troll had collided with the keep—which was right when Benji had sneezed behind him, causing him to overbalance and, well, splat.

And here they were.

“It could be worse,” Benji offered. He didn’t seem nearly bothered enough by the dead duke spread beneath them, in Calarian’s opinion.

“Worse? How could it possibly be worse?” Calarian demanded.

“Well, he could have grabbed my hand and taken me with him, and that would have been a real loss,” Benji said.

Calarian wondered for a split second if it was too late to shove Benji over the edge, but restrained himself. Collectivist anarchists didn’t, as a rule, murder members of their own collective. Besides, Benji did have certain redeeming features.

He pushed down his murderous impulses and said, “You know we were just supposed to help him with his mountain troll problem?”

Benji glanced over the edge of the parapet, and then back at Calarian. “Well then, we’ve succeeded. I mean, he doesn’t have a mountain troll problem anymore, does he?”

“Benji, you killed the duke.”

Benji held up his finger. “Accidentally! And I do actually feel a little bit bad about that.”

Benji chewed his lower lip. “I mean, he seemed nice. For an oppressor of the people.”

“That’s also true,” Benji said. He flicked a shank of black hair over his shoulder. “I don’t even like people, and I’m still fighting for their rights. That’s so selfless of me. I’m actually amazing.”

“You are amazingly full of shit!”

Calarian rolled his eyes. “My problem, Ebenjilarian, is that our quest is to help the duke, and you just killed him! How are we meant to explain that, exactly?”
“Well... he must have been some sort of villain. It’s a well-known fact that villains generally hurtle off cliffs or towers to their deaths. It’s a rule.”

“He wasn’t a villain! He was nice! We met him at Loth and Quinn’s wedding, remember?”

Benji wrinkled his nose and blinked. “No.”

“He was nice!” Calarian repeated. Though the duke had been getting on in years, he’d still been in good shape. Well, barrel shaped actually, but that had been a good enough shape for the ladies, when combined with the wicked twinkle in his eye. In fact, Calarian distinctly recalled that the duke had disappeared with one of the giggling maids for a while, only for the young woman to return flushed, smiling and, for some reason, smelling faintly of ginger. “You really don’t remember him from the wedding?”

“I barely remember him from a minute ago.” Benji shrugged. “Anyway, I’m sure we can get another one.”


“What?”
“Get another duke,” Benji said. “There’s bound to be another one around here somewhere.”

Calarian narrowed his eyes. “There isn’t. Klaus didn’t have any heirs. Did you even read the information about Tournel that Quinn gave us before we left?”
“No,” Benji said. “I wouldn’t have come if I’d known there was going to be a test.”

Calarian sighed and looked out at the view. The landscape was strikingly beautiful. Jagged mountain peaks pierced the sky, snow-capped and dazzling. Lower down on the mountainsides, impossibly green grass grew, dotted with wildflowers. Calarian thought he could even see someone dancing across the meadow in the distance. The brisk, invigorating breeze carried the faint sound of distant cowbells.

The small village of Tournel itself, nestled between the mountains, was made up of wooden houses, painted in bright colours, with sharply pitched roofs. Most of the houses were adorned with decorative carvings and mouldings, and reminded Calarian of gingerbread cottages.

The castle seemed a relic from an older age; it was a squarish stone building with a single tall tower which made up part of the town walls. Everything was very picturesque and lovely, apart from the remains of Duke Klaus splattered at the base of the tower.

Calarian sighed again. They were supposed to be getting a report about the mountain troll attacks from Duke Klaus, but whatever information the old man had been keeping in his skull was now unfortunately scattered over quite a largish area of ground. How was Calarian supposed to complete this quest without Duke Klaus? Ask the duke, Quinn had said. He’d been very clear on that. Calarian shot a glare at Benji, and for another moment was tempted to tip him over the edge of the tower too.


Although...
Benji was right about one thing, and not just about how many times he could make Calarian come before his vision went fuzzy. (Five in one night, for the record.) Talk to the duke, Quinn had said, but he hadn’t specified whichduke. And surely the fact that Duke Klaus hadn’t nominated an heir meant that the position was wide open.

“What?” Benji asked. “You’re staring at me and you’re thinking. What?”

“We could get another duke,” Calarian said.

“Yes, but when you say it you’re being ridiculous,” Calarian said. “When I say it, it means I’ve got a plan.”