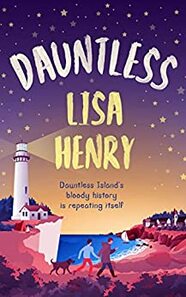 Cover art by Tiferet Designs
Joe Nesmith leads a peaceful life as the lighthouse keeper on Dauntless Island, a small island off the coast of Australia where the occupants are proud of their mutinous history and have very long memories.

When graduate student Eddie Hawthorne comes to Dauntless, he brings with him a historical diary that might just throw everything the islanders have ever believed into disarray—and one of them might even resort to deadly measures to make sure that Eddie’s research never sees the light of day.

When Eddie is attacked, Joe is drawn in to helping him discover which of the islanders could have done such a thing. The rising attraction between them doesn’t mean anything, right? It’s just a fling. But while Joe find himself wishing more and more that Eddie could stay on Dauntless, it’s clear that somebody else wants Eddie gone, permanently. And when the attacker escalates to murder, both Joe and Eddie find themselves in danger of Dauntless Island’s bloody history repeating itself.

Dauntless is a 30 000 word novella.
Very light, sweet reading with a dog, a bit of romance, humour, and a cosy style murder/mystery at its heart.

- On Top Down Under Book Reviews
Buy Dauntless here:

Joyfully Jay
The Novel Approach Reviews
On Top Down Under Book Reviews
Book UNfunk
An excerpt from Dauntless:

Joe Nesmith first saw the guy on Wednesday afternoon. Joe was making his way from his cottage into the village—a slow, meandering walk that he took every day with Hiccup the dog—and the guy was walking up the hill as Joe was walking down. He was in his mid-twenties, maybe, with a green beanie pulled down over his dark hair, a red jacket, black pants, and a bright orange backpack on his back. He clashed like a Liquorice Allsort, but it wasn’t just his clothes that made him stand out—it was the fact that he was a stranger.

Dauntless Island didn’t get many tourists—it was a four hour boat ride from the mainland—and the few they did get usually didn’t come in winter. Joe hoped for the guy’s sake that he’d packed some decent weather-resistant gear in that backpack of his.

He’d been prepared to pass by with just a nod of acknowledgement when Hiccup, delighted to see a stranger, bounded up to the guy barking, and then bounced around him in excited circles.

Like Amy couldn’t have called the dog something that didn’t sound quite as stupid when Joe yelled it? His little sister was the worst.
“Hey,” the guy said to Hiccup, and reached out a hand to pet her.

Hiccup immediately hit the ground like one of those fainting goats, writhing in delight as the guy crouched down to rub her belly.

Joe crossed over to them, an apology for Hiccup’s disgraceful manners on his lips, and then the guy looked up.

He was cute. Cute as hell. He had wide brown eyes framed by black-rimmed glasses, a snub nose, and a generous mouth that was twitching into a grin even as Joe stared down at him. He straightened up again, a flush rising on his cheeks, and Joe wished that he’d picked today to shave instead of putting it off for so long that he looked like he’d been marooned for six months, and also that he’d actually showered and changed out of his work clothes before heading into the village.

“You’re camping?” he blurted out, because apparently he’d lost the ability to start a conversation with an introduction like a normal person on the same day in the distant past that he’d lost his razor.

“Yeah,” the guy said, flashing him a sunny smile that belied the gray clouds rolling in from the ocean. “Up near the lighthouse.”

Joe raised his eyebrows. The guy was going to freeze to death when the temperature dropped with the storm tonight. The views from the lighthouse were magnificent, but that side of the island wasn’t sheltered at all.

The guy looked at him expectantly, as though waiting for Joe’s response, and yes, Joe had completely forgotten how to talk to people. It didn’t help the guy was so pretty and Joe was having difficultly not staring at his mouth.

Hiccup was already bounding on again, eager to get to the village.

“Okay,” the guy said at last, his smile fading into an awkward grimace. “It was nice meeting you.”

The guy curled his fingers around the straps of his backpack. “Okay…”

“Joe,” Joe blurted out at last, holding his hand out. “Joe Nesmith.”

He should have known the guy would be trouble.