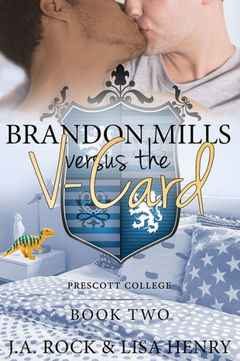 Smart, shy Prescott sophomore Brandon Mills is working hard to overcome his troubled past and be normal. With the help of his friends Mark and Deacon, and his brothers at Phi Sigma Kappa, he’s slowly coming out of his shell. But when he accidentally drenches a freshman in orange soda, he faces something he’s not ready for: a boy crushing on him.

Alex Kekoa pledges Phi Sig because it has everything he wants: a house full of nerds who won’t tease him for being smart, a dog, and Brandon Mills. Brandon is just the type of guy Alex needs to help fulfill his college ambition: losing his virginity. Except Alex doesn’t know that Brandon can’t stand to touch or be touched.

When Alex and Brandon are drafted onto the Phi Sig Academic Challenge team, their mutual attraction grows. If there’s anyone who can help Brandon discover it feels good to touch and kiss, maybe it’s klutzy Alex with his cute glasses and his dinosaur obsession. But as the competition--and their relationship--heats up, Alex’s determination not to die a virgin clashes with Brandon’s vow of lifelong celibacy, forcing them to examine what’s truly important to each of them about love.


Reviews of Brandon Mills versus the V-Card:

​books2read.com/brandonvs
An excerpt from Brandon Mills versus the V-Card:

Two hours later Brandon was hiding in his room. He’d made it through the first hour of the Phi Sig Meet and Greet before he’d run out of things to say and gotten the hell out. He sat on his bed with a book, pretending he wasn’t really hiding—he was studying—and he didn’t really need to be downstairs at all.

Next door at the Alpha Delt house, the bass was pumping and people were cheering. Brandon rolled his eyes at the noise before the disparate threads of it joined together into a chant: “Mark! Mark! Mark! Mark!”

Brandon crossed the floor and stuck his head out the window, but he couldn’t see anything from here except the back corner of Alpha Delt. God. He hoped Mark wasn’t on the roof or something stupid.

A victorious cheer rose, and Brandon sighed with relief. Whatever dumb thing Mark had done, at least he hadn’t broken his neck doing it. Yet.

A few minutes later someone knocked at the door.

Deacon stepped inside, holding his phone. “Did you hear that?”

“Surfing.” Deacon sat beside him and held out his phone.

There was a blurred picture of Mark. On a surfboard. In the pool.

They both watched, wincing, as Mark took a run up, jumped onto the surfboard, and rode it the length of the pool as the crowd cheered him on.

“He’s going to kill himself,” Brandon said, at the same time as Deacon said, “Crack his head open and die.”

They watched the video again.

Deacon shook his head. “You’d tell me, right, if I was being paranoid? I mean, that’s an incredibly stupid thing to do, isn’t it? It’s not just me.”

“I am going to kick his ass,” Deacon said, then corrected himself. “Arse.”

Brandon grinned. Mark didn’t have pet peeves so much as an entire menagerie of peeves, but first and foremost was the word ass. He’d been training Deacon out of its use for about a year now.

“Look,” he’d said last night at the bar, “I’ll eat your fries instead of chips, and I’ll learn what the difference is between a gallon and a liter, and how far it takes to walk a mile instead of a kilometer, but you will never take my arse away from me. Are we clear?”

“I wouldn’t dream of taking your arse,” Deacon had said, while Brandon had tried to pretend the conversation wasn’t happening.

Mark had sucked ketchup off his finger. “Actually, Deke, you can take my arse whenever you like, as long as you pronounce it right.”

Brandon had blushed as bright red as the ketchup, he was sure. Mark didn’t have much of a filter. He said whatever the hell he wanted and thought he could get away with it just because he had a cool accent and a wicked smile. And most of the time he was absolutely right.

Brandon sometimes envied his friend’s uninhibited nature. And then he remembered it led to riding a surfboard the length of a pool with a beer in each hand, and, following that scenario to its logical conclusion, would very probably end with a visit to the emergency room and a bunch of stitches.

Mark was crazy, which worked for him but was not Brandon’s thing at all.

“Sometimes I don’t even know why we’re friends,” he said jokingly, feeling a little uncomfortable when Deacon looked at him. Heat rose in his face. God, did Deacon think he needed his self-esteem boosted or, worse, that he was fishing for compliments? He forced a laugh. “Because he is cray-zee!”

Deacon laughed, and looked at his phone again. “Yeah,” he said, like he wouldn’t have it any other way. “Yeah he is.”

Brandon wasn’t sure how it had happened, but somehow Deacon had managed to get him downstairs again, and suddenly he was mingling.

“Just mingle,” his mother used to say, waving her hand at a full room as though it was nothing to be worried about. Her smile was a little too bright though, a little too manic, as though she was afraid he’d ruin it. Milford was a small town, and everybody knew about Brandon and Mr. Fenimore. That was the worst part. In a city, maybe Brandon could have been anonymous, but not here. Even though his name was kept out of the paper, everybody knew.

After the trial, Brandon had begged his parents to move towns, or to at least let him change schools. But his dad was the town’s only optometrist, and he couldn’t just pack up and go. They didn’t have the money for boarding school, and they couldn’t send Brandon to St. Mary’s. They weren’t Catholic.

Brandon would have been Catholic in a fucking heartbeat if it had meant not having to walk back into his old school. He’d gone from being a reasonably popular kid to a leper, all in the space of a few months. First he wasn’t invited to birthday parties and sleepovers anymore, and then kids stopped coming to his, and somehow he became that kid—the one with no friends, the loner, the loser—all the way through until he graduated from high school.

He froze as he got caught up in a crush of people. Someone walking by put a hand on Brandon’s shoulder to steady himself as he squeezed past. Nothing threatening about the touch, nothing weird; the guy’s hand was there and then gone. But Brandon suddenly felt too hot. He pushed through the crowd, heading for the stairs, but as soon as he started up, he saw Tony on the landing, showing a group of rushees a video on his phone.

Brandon turned back and headed for the kitchen, not sure what he planned to do there.

He went to fetch a soda from the cooler. A soda was good. It gave him something to do with his hands. He cracked it open as he turned and stepped into a group of rushees. The one closest to him squeaked a warning, but it was too late. Brandon had doused them both in orange soda.

“Shit,” he said, taking in a pair of wide, dark eyes framed by hipster glasses, and a mouth frozen open in surprise. “I’m sorry!”

“Omigod.” Alex was sticky and orange. It was even in his shoes. “Omigod.”

“I’m sorry,” the guy said again. He looked as guilty as that Labrador, the house dog, had earlier when some seniors had busted her stealing a packet of chips. Alex actually believed him. Maybe this wasn’t some sort of Let’s Be Assholes to the Unsuspecting Freshman game. And really, Phi Sig didn’t seem like that sort of fraternity, but what the hell did Alex know? He’d been at Prescott for all of a week.

“I’ve got a shirt you can borrow,” the guy said. “Come up to the bathroom.”

“Okay.” Alex shot a narrow look at Evan. If I get tied up with duct tape and beaten to death in a hazing ritual gone wrong, remember to tell the police you saw me with this guy last. Which was probably too complicated to convey in a glance to someone he didn’t really know that well.

He followed his assailant up the stairs.

“I’m really sorry,” the guy said again, ushering him into a large bathroom. It was nicer than the ones in the dorms, and for the first time Alex saw the point in rushing a fraternity. It was still a communal bathroom, but it didn’t seem like the sort where you were afraid to walk around barefoot. The stalls actually looked clean.

“It’s okay.” He managed a smile as he reached for the hem of his sodden shirt, a little embarrassed to be taking it off in front of some stranger, but aware he’d look more foolish just standing there drenched in orange soda. Alex pulled his shirt off, dislodging his glasses in the process. When he finally readjusted them, it was just in time to see the guy transferring his stare fixedly to the bathroom tiles.

I officially have a thing for blonds now.

“I’ll go get you that shirt,” the guy said, and disappeared.

“Omigod,” Alex whispered to his reflection. “Do not get a hard-on!”

Alex shoved his shirt into the sink and ran water over it before wringing it out as best he could. By the time he was done, Blondie was back.

“I think we’re about the same size.” He handed the shirt over.

Alex tugged the borrowed shirt on. It smelled like fabric softener, which for some reason struck Alex as incredibly sweet. Blondie used fabric softener in his laundry.

“I’m Alex,” he said, resisting the urge to cover his face with the shirt and just inhale.

“It’s okay.” Alex dropped his gaze for a moment, searching for something else to say. Brandon was cute, and his shirt smelled nice, and Alex wished he had the courage to actually make a move. He was in college now. He was supposed to be brave and open and stuff, wasn’t he? This wasn’t high school anymore. Except Alex didn’t really trust his gaydar yet, and Brandon was giving off some seriously weird vibes.

Not looking when Alex had his shirt off. Specifically not looking. His flushed skin. The way his hand had shaken when he’d passed over the shirt.

Maybe he was straight but curious.

Maybe he was still in the closet.

Omigod. How awesome would it be if they could be each other’s first time?