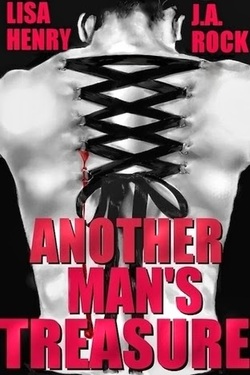 Cover design by J.A. Rock
Ilia Porter is Chechen mob boss Mikhail Kadyrov’s greatest treasure. After leaving home at eighteen to escape his verbally abusive father, beautiful, selfish Ilia has lived with Mikhail, proud of his ability to bring such a powerful man to his knees to worship. But when Ilia’s father, a police captain, kills Mikhail in a raid, Ilia’s world falls apart.

Entering to pick up the pieces is Mikhail’s younger brother, Nick—impulsive, power-hungry, and dangerous. When Nick tells Ilia he’s taking everything that belonged to Mikhail—including Ilia—Ilia is too lost in grief to fight. Nick takes Ilia prisoner in the apartment Ilia once shared with Mikhail and grooms him for a very important mission: to kill Ilia’s father and avenge Mikhail’s death.

Ilia wants no part in the plot, but being Nick’s ally is preferable to being Nick’s victim, so he begins to warp himself into the monster Nick wants him to be. Hope arrives when Nick takes another captive: Patrick, a shy massage therapist who’s stronger than he seems. Patrick and Ilia must join forces to escape Nick—and to keep each other whole as Nick does everything in his power to break them.

Warning: not a romance
This is fiction that will kick your ass.
​- Prism Book Alliance
Buy Another Man's Treasure here:

books2read.com/anotherman
Reviews of Another Man's Treasure:

A bright sting. The zip of satin across Ilia’s skin. Pressure on the rings so great that for a second Ilia thought they’d rip out. Then the pain faded to a throb, and the guy started threading the ribbon through the next set.

“All right?” the guy asked.

They were past the middle of Ilia’s back now. Each time the piercer pulled the ribbon taut, Ilia experienced such a mess of agony that he couldn’t think about anything else. But in the moments between, he could concentrate on the strangeness of the sensation. His skin was laced like a corset. A row of steel rings on either side of his spine. Black satin ribbon crisscrossing his back. He could feel blood trickle from some of the holes.

“This part ain’t as bad as the piercing, is it?”

Ilia tried to remember that pain—only half an hour since the piercer had forced the needle through his skin for the last time. It had hurt to have the rings put in, worse than having his nipples done, or his ears. But this, the constantpulling as he was laced up, might have been worse. “I don’t know.”
“You put on the Neosporin that’s got the painkiller in it? You’ll be all right. Shit, I might’ve got these crossed wrong.”

The ends of the ribbons drifted across Ilia’s back. “Nope, I’m all right.”

“You done one of these before?” Ilia hadn’t asked before they’d started. He’d asked, Do you know how to do this?

Guy’d said yes, but since then Ilia had seen him referencing a photo on his phone. Had heard, briefly, the garbled lines of a video tutorial.
Big difference, between you know how? and you done it before?

“Their bodies was all right. Their faces was kinda old looking, but I guess that’s not what you’re lookin’ at, huh? When you’re watchin’ that stuff?”

Ilia let out a long breath. Thought of Mikhail. Arched, flexing the muscles of his back as blood went to his cock.

“I don’t know how ladies did it,” the guy said. “Wearing corsets and shit. Back in the old days.”

“Mmm.” Ilia clenched his jaw against another wave of pain.

The piercer seemed young to be doing this. Maybe younger than Ilia. Nineteen, twenty? He had gobs of metal in his eyebrows and a spiked labret ring, but without the piercings, he’d have looked scruffy and average. A country boy. Short tawny hair, slightly mussed. A scraggly goatee, pimples on his neck.
Ilia sat up straighter and pushed out his jaw slightly to emphasize the clean line of it. Shook his head so that the tips of his long earrings brushed his jaw. Glanced down at the two braided metal pendants that dangled on black cords between his pecs, making sure they were centered, and imagined the picture he made—dark-haired, pale, beautiful.

He felt a private satisfaction whenever he met anyone unattractive. Didn’t matter whether the other person actually envied him. Like now, it didn’t matter whether the piercer was admiring the smooth skin of his back and his hard, lean muscles. Whether his gaze was drawn to the mascara Ilia clumped thick on his lashes, or the way Ilia kept his lips slightly parted because he could pull it off—made him look slightly dazed and sensual, instead of brick-dumb or Abercrombie. Didn’t matter, because Ilia felt enviable.

The guy tugged the ribbon through one of the rings on the left side of Ilia’s lower back. They weren’t really rings—they were little barbells with rings attached, to keep the piercing from healing. “Took me nine hours to do ’em both. Those girls.”

Ilia had been here four.

“You said you just want this for fun?” the piercer asked.

“I’ve got someone who’s gonna like it,” Ilia replied. “I think.”

“They’d better. All the trouble you gone through for it.”

The guy sang along with the radio—one of those mellow indie songs that was all quirky rhymes. Supposed to be poetic, but just sounded like the girl singing was half asleep and murmuring whatever stupid shit came into her brain.

The guy didn’t know most of the lyrics. He crooned nonsense as he got up to replace a latex glove. Shucked the broken glove into the trash—Ilia glimpsed a few red stains—and pulled on the new one, then came back around behind Ilia.

“What’s your name?” Ilia didn’t care, but after four hours together, seemed right to know.

Ilia tensed, and Kris pulled—through the ring, across his back. Through the opposite ring, and then the ribbon dangled just above Ilia’s ass on the right side. As Ilia swallowed nausea from the sting, Kris situated the left hand ribbon. Ilia tipped his head up, pursed his lips, and blew out the breath he’d been holding. “Fuck.”

Ilia shifted cautiously and felt the soreness climbing his skin like a curse of thorns growing up around a tower in a fairy tale. “I’m done?”

Ilia waited as Kris tied the laces. Kris’s knuckles were warm on his back. “Feel all right? I’m keepin’ it loose for now. You can tighten it when it stops hurting.”

This was loose? Ilia couldn’t move without the pressure becoming pain. “Sure.”

“Just be careful. You’re bleeding some.”

“Wow, man.” Kris shook his head, staring at his handiwork. “You want a mirror?”

Kris gave him a hand mirror. Ilia stood, wincing, and followed Kris over to the full-length mirror near the register. Searched for the angle he needed to see his back.

Fuck. Yeah, the laces looked amazing, but the blood made it kind of a horror show. He laughed. “Gross.”

“Sorry.” Kris grabbed a roll of paper towels. “I shoulda done this first.”

He went to the sink by the piercing chair and wet a wad of the towels. Returned and started wiping Ilia’s back. The water was cold. “It’s good,” Ilia said. “I fucking love it.”

“It’s gonna hurt for a while,” Kris said. “But that Neosporin with the painkiller. I’m telling you.”

“And I got some gauze I’ll give you. Did you bring a different shirt?”

Ilia shook his head. Expensive T-shirt. Gonna get bloody, and Ilia didn’t mind. Driving would be a bitch, though.

Ilia glanced at the Twysted Imyge shirts by the register. A dragon with a barbell through its nose. “It’s all right. I’ll wear mine.”

“Hope whoever you did this for likes it,” Kris said.

Yeah. Yeah, Ilia hoped so too. He hoped Mikhail’s fingers shook when they undid the laces, because Ilia was so fucking beautiful, and because Mikhail knew Ilia would do anything for him. Hoped when they fucked, Mikhail pulled on the ribbons. Ilia imagined panting into the pillow, shaking and sweat-drenched, and Mikhail’s big hand passing over skin barbed with nerves. His voice soft in Ilia’s ear.“Eaaaasyyyy, Ilie.”

He got out his wallet.